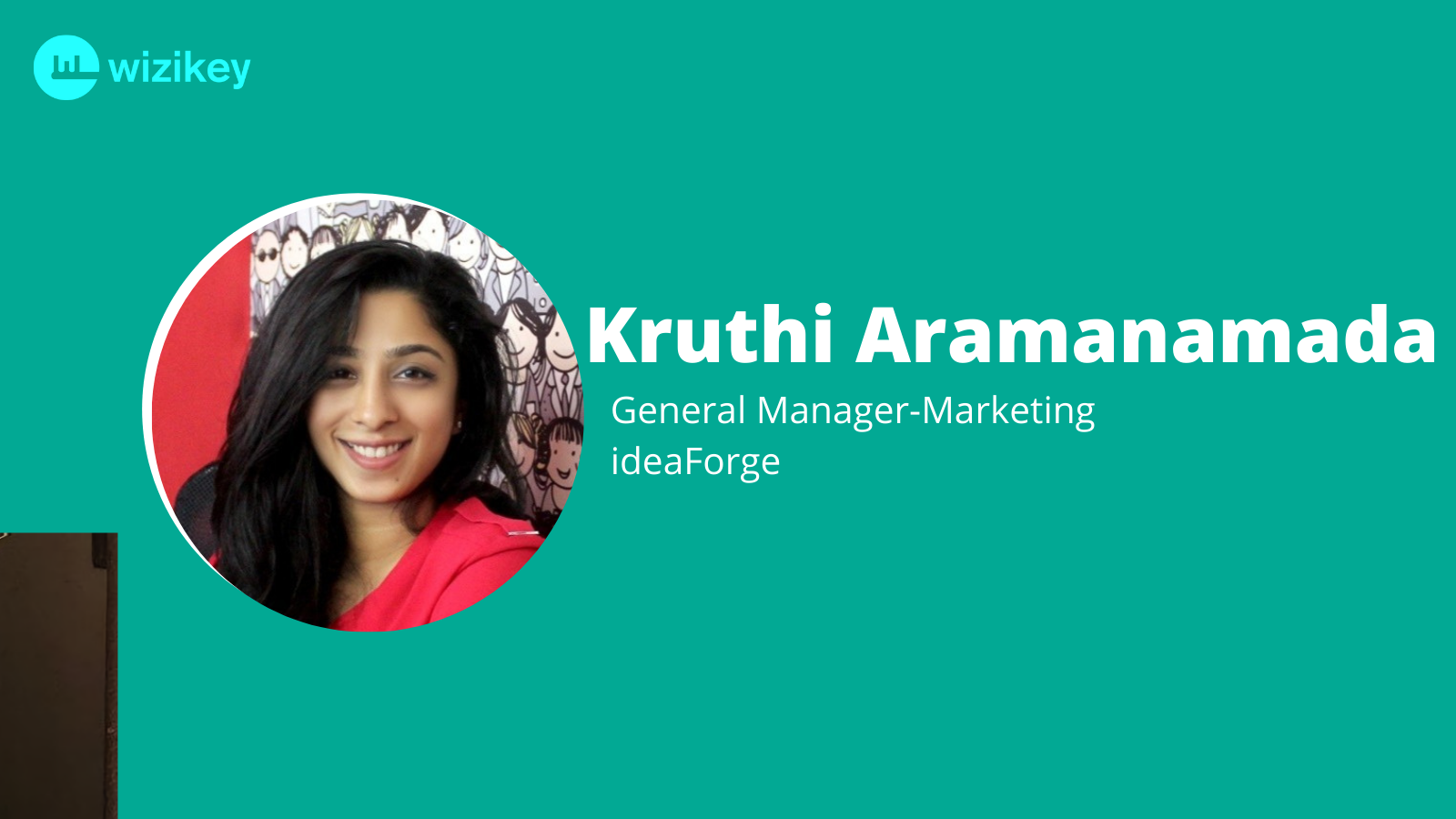 Data-driven marketing is no longer a myth and brands have seen growth in business, reach, and brand equity with the integration of data and communications. In today’s episode, we spoke to Kruthi Aramanamada, General Manager, Marketing from ideaForge, discussing how data became an integral and fundamental part of her career.

0.52: I started my career back when the word “startup” was not known, so I piggybacked on a lot of the startup growth curve and the startup bubble. I did not know I would be getting into marketing, but what I was basically doing was growing technology brands. So, helping these tech brands grow B2C apps, B2B, SaaS, and now proper deep tech hardware brands. And one of the things that I knew was hand in hand was communication. Therefore, communication and PR were always a very active part of my journey.

1.42: What I realized is that data is very, very important. In my first job itself, we had this pet project of the Google leadership team in India called the Next Billion Online. And we were supposed to increase the Internet penetration in India. Back then, it was just 10%. As a result, we were working on projects aimed at increasing Internet penetration. The first group of people that we worked with were students—students from a village, town, or city. So this was one of our first presentations, and we presented it to Google, saying, hey, you know, this is the impact. And we showed videos of children smiling, and it was a goosebump moment for us. However, they were like, “Can you quantify the smiles?” And that’s the first instance of realizing how important data, metrics, and measuring impact were. So what we did is we went back and we came up with the metric of measuring and collecting data. We understood how they were before a particular curriculum that we had developed. And that is my first touchpoint with data as well as metrics. So we realized it was a 70% improvement in their Internet knowledge, and henceforth there was no looking back because Google proliferated that entire curriculum across India. So it was a successful project. So what I remember is that data is really important. At a very young age, for me, it had become an integral and very fundamental part of everything I do. So obviously, data impacts ROI, and decisions based on data become a part of my career henceforth.

3.52: I keep quoting Edward Deming ” In God we trust; all others bring data”. Basically, PR and branding, in general, have been extremely difficult to incorporate any ROI or biometrics. But obviously, you have to have ROI and metrics. As I said, it is really important to show the input and measure the output in terms of impact and therefore justify the ROI. So I think when it comes to typical campaigns, what I do is measure them in two phases. One is the pre-campaign and one is the post-campaign. In the pre-campaign, I see the targeted media list and a data-backed curated set of journals. For example, journalists are very sensitive people. They don’t like receiving any kind of spam. They want to make sure that they receive information only about the topics they talk about, and they are a very important asset to us. So we curate this data into different pockets, saying these are the guys who would like funding news, and these are the guys who like technology and product features. Then, of course, there are keywords, there are trends, there are competitors, social media, engagement rates, and the regular run of the main things that you measure. And of course, the website metrics. I measure is the number of PR coverages and mentions. These are again very run-of-the-mill PR, KPI numbers that you measure. But I also segregate them into two lists. One is the targeted media tier 1 list that got picked up– that literally measures your conversion rate and the targeted media coverage tier number two, which is obviously the tier 2 media that covered your articles. And the one major thing that has helped me throughout is a few different things that measure the brand itself. One is the brand keyword search. That is the clicks and the impressions that you can get. In fact, one of my PRs, which we did in the 2021 jab, was just a simple PR around the Idea Forge of receiving an order of 20 million from the Indian Army. This went viral, and the reason it went viral is because it was one of the key deals in the entire Indian drone ecosystem. So it was a big deal for the industry itself and for the defense industry as well. So, we had all our defense influencers and drone influencers talking about it. So what I realized is our brand literally picked up 100 X, which means our brand keyword search became 100 X.That’s literally like if today you have one person searching for Ideaforge, post the PR, I have had a 100x spike in my metrics. So, that is a very important number that I keep recommending to all PR enthusiasts to search for because that is a direct hit on your measurement rate. You can justify that number to anyone. You can just say that today, you know, your brand is worth one, and tomorrow your brand is worth 100 X. So it’s like literally increasing your market valuation for your brand.

7.44: Google Analytics, Google Search Console, and I also like the Wizikey Trends feature because you can see how your competitors are faring. You can see what the trends are like. If I don’t have a topic, I can always pick up a topic that’s trending and talk about it. So these things really help because you cannot be just doing traditional PR where you just expect something to fly because you think it’s good news. It has to be aligned with the audience and the trends.

08.26: So I worked for a firm called Lookup. And this news was about funding news that we were waiting to announce. Biz Stone, our Twitter co-founder, had invested in Look Up, and Look Up was a small startup based out of Bangalore. And, Twitter’s co-founder, for the first time investing in an Indian startup, was a news provider. So what happened? We had everything ready. We were working with a PR agency back then. Everything was ready. It was just about pressing that one button. But then what happened? Biz Stone randomly tweets, ” Hey, I’m excited about this funding.” I’ve funded a firm called Look Up which is Bangalore-based and; India-based because a lot of people might not even know where Bangalore is. And then I have calls until three or four in the morning. This news went viral. I think we had like a million downloads that day and it just went viral. And then we had to release the news immediately, catch up on everything, and release a formal announcement about the funding.

10:00: Everything nowadays is sort of moving towards automation. Everything is moving towards AI. And as I said, we will have to customize our content and our releases according to the trends of the market and not just follow our own trends. So somewhere, I was just saying that we live in the metaverse right now. So we have to adopt the change. And there are more and more tools coming up. A lot of automation is happening. I am very much for data-backed automated PR. I would just say that would definitely be the future, and I’m hoping that’s the future. Newspapers are good. Print articles are good, but we also weigh digital articles above print articles today. So that’s print going out of style and digital print is taking over.

11.23: The first thing is to prepare. Preparation is extremely important for anything. So we actually have this idea that says “prepare and take off.” Preparation is critical because it allows you to measure things, collect the right data, and plan your campaigns accordingly. You can target your campaign to the right audience so that you receive more conversion rates and not regret the post factors. Try to prepare really, really well. Determine the key performance indicators (KPIs) for your campaign. For example, for me it might be brand search or brand keyword search results, or for you, it might be something else. It might be just increasing the number of leads or targeting that one particular company that you’ve been looking to get hold of or a group of organizations that you want to get hold of. As a result, defining the objectives prior to launching a campaign is critical, and the KPIs will be determined based on the objectives. Define them, measure them well before you start a campaign, and then, of course, post campaign again, measures all the results. Just don’t be happy with the articles and media mentions. What I’ve also realized is that when you talk more about these articles, when you share them, pump them up, and amplify them on your social media, the results are much higher. For example, one of our articles went viral when an influencer reposted it. So after that, we got more coverage. So a campaign is not really over until you actually use content marketing to do the same. And finally, I don’t think there is a cookie-cutter formula for how to do successful PR. There are just a few thumb rules like I just mentioned. Discover what your formula is by analyzing data and concluding what your KPI should be for your industry, for your organization, and for the goals of the organization. And then you draw conclusions about whether your specific campaigns or campaigns were successful or not, or what kind of changes you need to make, and what formula you can rely on. 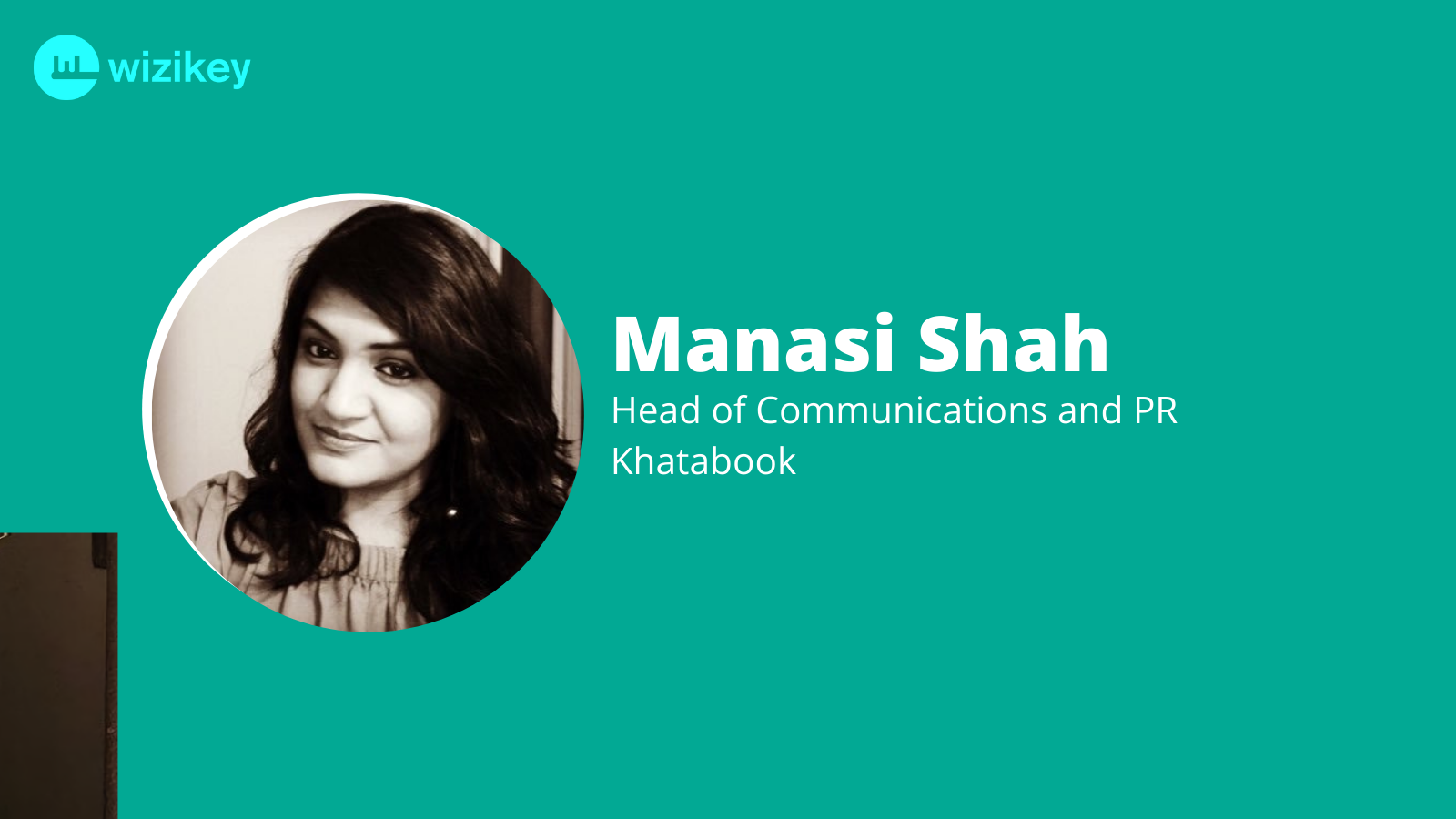 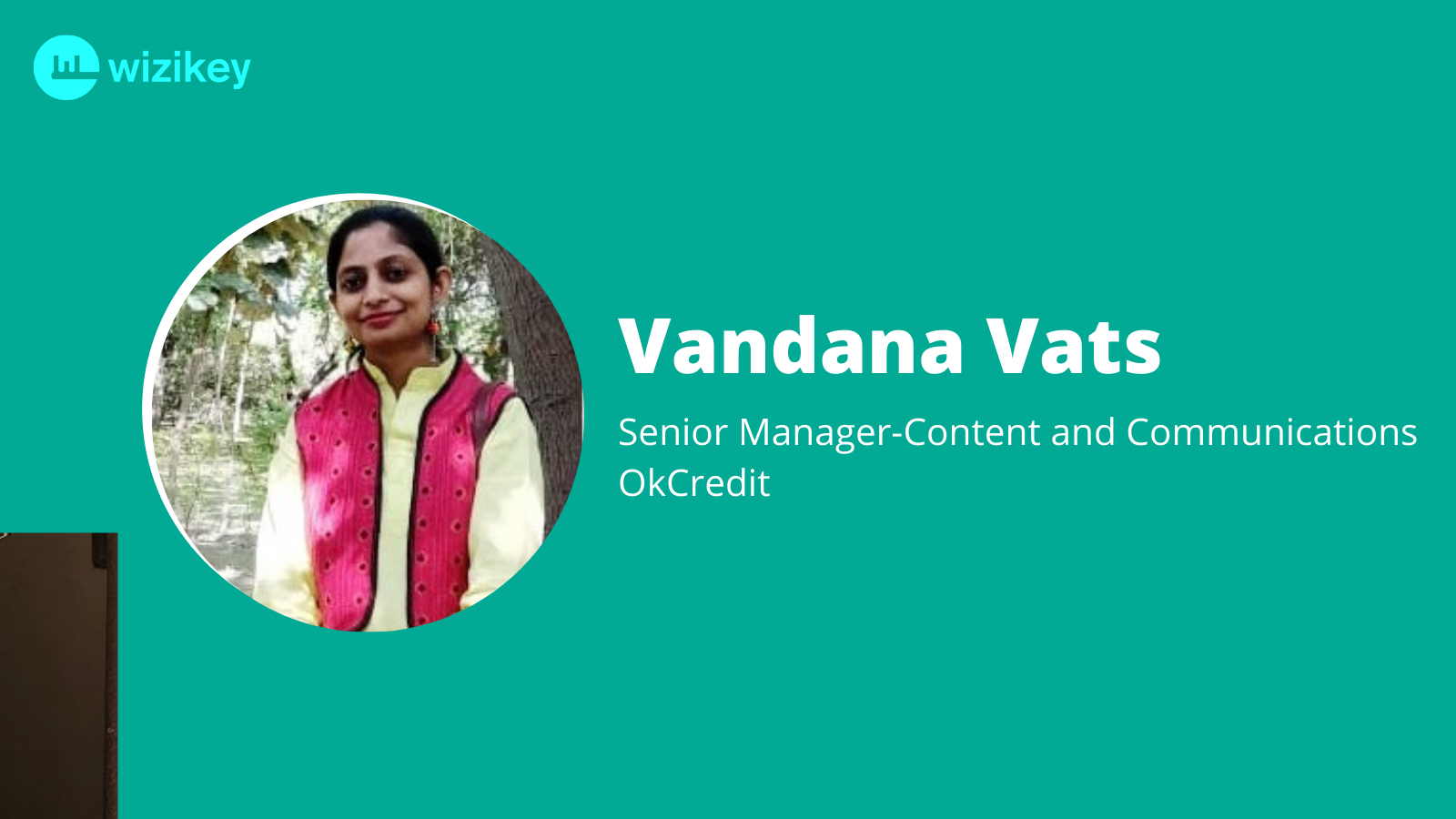 In this episode, we spoke to Vandana Vats from OkCredit, discussing her passion for data-driven storytelling. 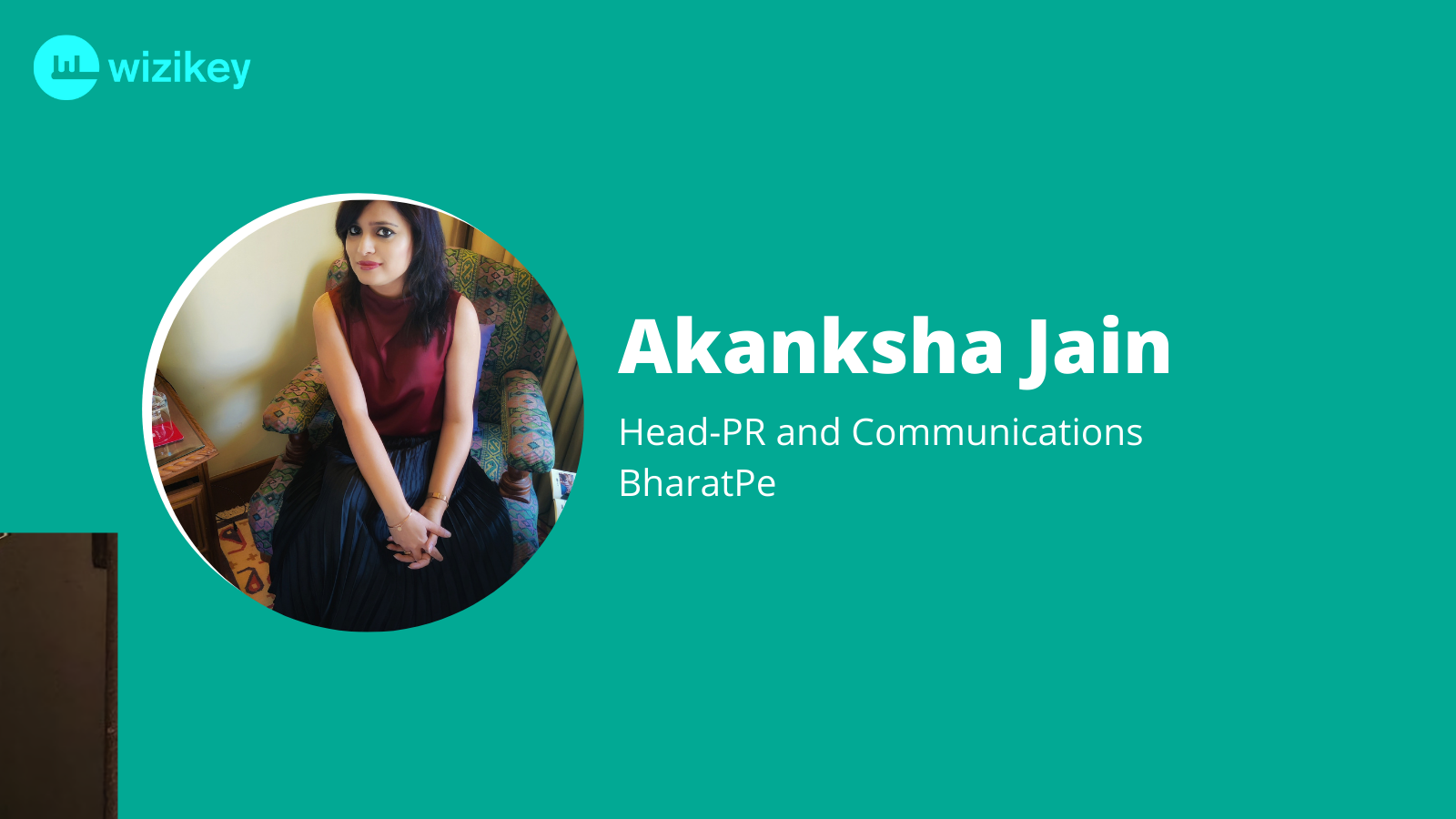 Data will be increasingly important in communications: Akanksha from BharatPe

In this episode, we caught up with Akanksha Jain from BharatPe, discussing her career in communications and the role data played.

In this episode, we spoke to Vandana Vats from OkCredit, discussing her passion for data-driven storytelling.

Data will be increasingly important in communications: Akanksha from BharatPe

In this episode, we caught up with Akanksha Jain from BharatPe, discussing her career in communications and the role data played.